Giraffes on Horseback Salad: Salvador Dali, the Marx Brothers, and the Greatest Movie Never Made 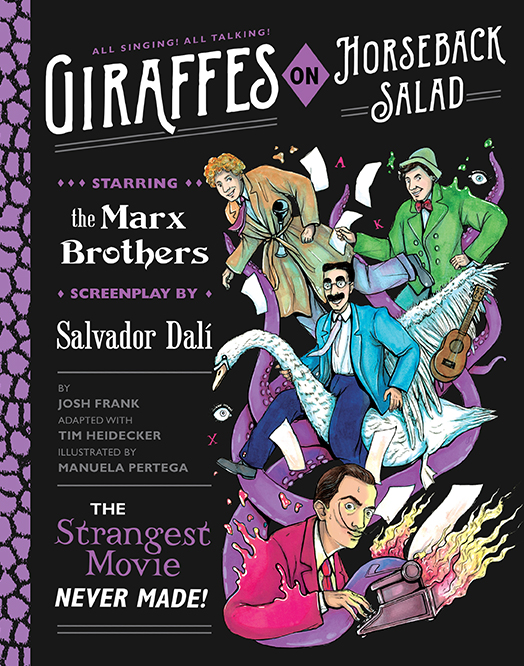 Surrealist icon Salvador Dali and iconoclast comedians The Marx Brothers planned a never-made film that merged their sensibilities in a sublime mashup of absurdity, surrealism, slapstick, and wit. But the original screenplay was lost...until now. It sounds like fan fiction, but it's true: modern art icon Salvador Dali struck up a friendship with chaotic pantomimer Harpo Marx, which led to a proposed film, Giraffes on Horseback Salad. Rejected by MGM studios, the script was thought lost forever. But author Josh Frank found it, and with comedian and writer Tim Heidecker (Tim and Eric; Tim & Eric's Zone Theory) and Spanish artist and comics creator Manuela Pertega, he's recreated the film that Dali and the Marx Brothers would have made...as a graphic novel that presents the story in all its full-color, fully cinematic, fully surreal glory. In Giraffes on Horseback Salad, normality clashes with imagination as a businessman named Jimmy (played by Harpo) is drawn to the mysterious Surrealist Woman, whose very presence changes humdrum reality into Dali-esque fantasy. With the help of Groucho and Chico, Jimmy seeks to join her fantastical world...but forces of normalcy try to end their romance and pull them down to earth. Josh Frank's expansion of the original film treatment is aided by new Marx Brothers antics created with Tim Heidecker, including comedy bits, songs, and visual gags. Bookending the recreated movie are illustrated text pages that relate real-world events leading to the project, and what happened after. A remarkable plural marriage of art, absurdity, biography, and comedy, Giraffes on Horseback Salad is a cinematic, comedic, and literary experience like no other. A one-of-a-kind collaboration between legends of art and comedy, thought to be lost to history. Appeals to anyone who loves classic comedy, 20th century art, graphic novels, history, or biography. Featuring comedy by Tim Heidecker (Tim & Eric), award-winning comedian, writer, and actor. Bold and colorful art with Daliesque visuals, classic Marx Brothers antics, and a touch of Old Hollywood. It's like watching a movie in a book! Along with the graphic novel, which takes up about 2/3 of the book, illustrated text pages sections provide context, explaining the realworld events that made this historic collaboration happen. It's like two books in one! Created with the the cooperation of the The Gala-Salvador Dalí Foundation.